This is a list of characters which appear throughout Pretty Rhythm Rainbow Live. The initials of the seven main characters spell out RAINBOW (Rinne, Ann, Ito, Naru, Belle, Otoha, Wakana).

Naru Ayase is the natural air-headed lead character of Pretty Rhythm Rainbow Live. She is below the average height of middle school girls; therefore she drinks milk everyday in order to become a tall and mature lady in the future. For Naru who loves decorating and changing the look of just about anything, owning a shop like Dear Crown is her dream.

Her catchphrase is "Happy Naru!"

When Naru learns of a fashion brand shop named Prism Stone who is recruiting middle school students, she immediately applies to be manager for her work experience program at school. Along the way to the audition, Naru meets a pink penguin named Lovelyn and they both take a liking to each other. Throughout the audition, she fails to impress the owners and discovers that she has to perform a Prism Show as well. When it was her turn to perform, she realizes she can see the dance to any music and is also able to pull off the mysterious Prism Live using the help of Rinne. With that, Naru is immediately selected to become the manager of Prism Stone.

Naru had feelings for Kouji from the beginning she met him, but later understood that Ito and Kouji are meant to be together.

Ito Suzuno is a delinquent that goes by her band name Cross (クロス, Kurosu). As the daughter of famous musicians, Ito can play almost any instrument and even compose songs. She lives in a live house, often helping out band members by filling in or doing their makeup. When her mother and younger brother left home for Hokkaido, Ito stopped getting on good terms with her father. Because according to her, her mother and young brother left them because his father cannot play guitar after his accident and he is not even trying to do so.

Her catchphrase is "Intense".

As her family is now separated, Ito believes the only way to bring them together is to buy her father's guitar which is on sale at a music shop. One night, she encounters a penguin named Coolun who becomes clingy to her, leaving Ito no choice but to bring the penguin home. The following morning, Naru invites her to join Prism Stone. After meeting the owner, she decides to join learning she will get paid in order to buy the guitar. Though the ability to perform in Prism Shows is required, she manages to become Prism Stone's makeup artist with the knowledge from her mother while she was younger and the ability to perform Prism Live with the help of Coolun. Even though she had no intention of becoming friends with Naru and Ann, they slowly form stronger bonds when they meet Prism Shows.

Ito also loves Kouji Mihama, a guitar player and later performs with him in a band with her family.

Ann Fukahara is the captain of the Prism Dance club at her school. She is the eldest daughter of a senbei shop owner but prefers making sweets instead leading to everyday fights with her father. Demonstrating many leadership abilities, she is considered an ally of justice to many of her schoolmates especially Naru.

Her favorite sayings are "Leave it to Ann!" and "Delicious".

For work experience, Ann is against working at her family's senbei shop because it's already an everyday thing for her. Though demonstrating an ability to make senbei, she is equally good at making sweets and prefers to find work as a pâtissière. Ann is offered work at Prism Stone after being led by Ann into the building where Naru had trouble making sweets for the shop. She is accepted by the owner as her sweets and performance were both fine keeping it as a secret from her family, but for the first time, Ann performs Prism Live.

Ann likes Kazuki, a street dancer and becomes intimate friends. She has also been friends with Wakana Morizono, a member of Bell Rose, since childhood. 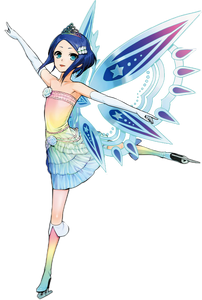 Rinne, estimated to be 14-15 years old, is a girl full of mysterious effected by amnesia. She appears at Prism Stone who knows of her secret and is always appearing and disappearing at the blink of an eye. Though she isn't supposed to, Rinne performs Prism Shows at her own will in a shining rainbow dress and can perform four chained jumps at ease; therefore making her a huge subject for many reporters of Prism Shows.

As Prism Shows are in danger of losing its shine in Naru's world, Rinne intended to travel to Naru's world and introduce Prism Lives; however she ran into trouble which caused herself to be lost in Naru's world. In order to regain her memories, she is currently living in the household of Naru Ayase and guides the way to an understanding between the characters despite being effected with amnesia.

Bell Renjōji is the top student of Edel Rose. She is a very talented individual who can fluently speak five languages and is a national-level champion winner at the violin. Bell is always pampered by Otoha Takanashi who constantly apologizes to her if she doesn't do things right.

Bell enrolled in Edel Rose at the order of her mother and was joined by Wakana Morizono; she also meets with Otoha who had forgotten her shoes. After the audition, the three meet at Edel Rose's ice-skating rink where Otoha returns the shoes Bell had lent her. Bell insisted that Otoha keeps it and lends a matching pair to Wakana and herself, forming herself a circle of friends. At some point, her small group had slowly drifted apart in order to achieve significance alone. After learning she cannot perform Prism Live, she gives up on Prism Shows believing she had no right to stand at the top. Otoha and Wakana manages to bring across their feelings of love for who she is and the three form a unit called Bell Rose. After learning that she had been loved all along, she discovers love is all she needed to perform Prism Live.

Otoha Takanashi is the constantly hesitant Prism Star of Edel Rose. She has the ability to make delicious tea in order to please Bell Renjōji who brought her to Edel Rose after lending her a pair of shoes she had forgotten to the entrance exams. Otoha is known to be a completely different person when it comes to Prism Shows as it is never like her usual hesitant self.

She loves fantasy and fairytales, thus her catchphrase is "Märchen!" (translation: "Fairytale!")

After forgetting a pair of shoes to Edel Rose's entrance exams, she is given a pair from Bell and started joining her and Wakana Morizono during their practices. The three became friends, but their friendship started to fade away resulting Otoha to even be kicked out of their practices. After finding her confidence when she joins Prism Stone, she returns to Edel Rose taking an audition to become Bell and Wakana's third member for the Try! Groovin' Session tournament. During the audition, Otoha learns to perform Prism Live finding out how much better it felt to speak up and become honest with herself.

Wakana Morizono is a lively member of Edel Rose. She is always bored, so Wakana likes to play tricks on Prism Stone in order to bring a bit of interest into her life. She is always by Bell's side which leaves people confused as to why and often gives her interesting readings about her future.

Wakana had always carried deep hatred towards Ann Fukuhara who introduced her to Prism Shows and assumed she stole it from her. After transferring to a different school from Ann's, she met Bell. Learning how fun it was to be friends with her, the two took the entrance exams to Edel Rose meeting Otoha Takanashi. After a reunion with Ann, she learned that Ann only performed the Prism Show in her place because Wakana fell sick with a fever. Wakana forgives and thanks her allowing herself to perform Prism Live. Though Wakana tried to deny her love for Bell to be fake after her selfishness, Wakana realized that she did love Bell after a lecture from Otoha and they make up becoming a unit called Bell Rose. She often says "nya" in her sentences.

Wakana also has feelings for Kazuki, just like Ann. She often gets jealous when she sees Ann around Kazuki.

Lovelyn is the Pair Friend of Naru Ayase.

Poppun is the Pair Friend of Ann Fukuhara.

Kurun is the Pair Friend of Ito Suzuno.

Femini is the Pair Friend of Otoha Takanashi.

Ethni is the Pair Friend of Wakana Morizono.

Starn was formerly the Pair Friend of June Amou. She is currently travelling with Rinne.

Chisato Ibara is the owner of Prism Stone. She is actually a messenger from the Prism World using a borrowed android form created by DJ Coo, her real identity is a pink penguin named Momo.

DJ.Coo is Prism Stone's in-house DJ and creator of Momo's android form. His real name is Rei Kurokawa, and was once himself a talented street dancer and a top-ranked Prism Star.

June Amou was a top Prism Star and leading model for the Dear Crown store. She, like Rinne (who is another form of her), is a messenger from the Prism World who stayed too long on Earth to spread the Prism's sparkle. It is revealed that she was the cause of the distortion that caused Rinne to fall into Naru's world After being defeated by Bell Renjōji at Over the Rainbow Session and losing her title of Prism Queen, she decides to stay on Earth as a human rather than return to the Prism World, losing her abilities and memories as a Prism Star in the process.

Hijiri Himuro is the former head of the Prism Show Association and current supervisor of Edel Rose. Like DJ Coo, he was a former top Prism Star until a serious injury (deliberately orchestrated by rival Jin Norizuki) forced him into retirement. He eventually becomes romantically involved with Juné Amou.

Ryuunosuke Ayase is Naru's father and is a children's book author.

Rina Uchida is Naru's classmate and friend in class 2-A. Rina has black hair tied into twin braids and wears round glasses. As work experience, she is working in a flower shop in her neighborhood.

Ai Jōzenji is also Naru's classmate and friend in class 2-A. Ai has medium brown hair tied into pigtails. As work experience, she is working in a bakery near a station.

Community content is available under CC-BY-SA unless otherwise noted.
Advertisement